Phoenix Comicon was a phenomenon!! So much fun in one weekend!! Loved hanging out with the Steampunk People and reconnecting with the Bunch from Wild, Wild, West Con. Loved meeting and hanging with https://www.facebook.com/dawnritzz?fref=ts" target="_blank" rel="nofollow">Dawn Ritz,  Hail Satin!! yes satin the fabric, it's an in joke, just roll with it.

Right now things are getting back to "normal". My husband, the psychology major, says that "normal", "perfect" and "average" are abstract, impossible concepts that don't actually exist. However, things are getting back to the organized chaos that happens between conventions, much like MacArthur's concept of "peace". And the old brain pan is letting me get less sleep as it looks for new things to feed to my sewing maching. I have the materials for a clear vinyl, black lace and slipper satin trimmed corset. Still trying to figure out what is to be worn under it....

Also have stuff for my summer weight Harry Potter school robes. as well as a beautiful ivory suede cloth for a new Steampunk outfit/character. The concept is a husband/wife team of temporal Bounty Hunters. My outfit is a "traditional" 3 skin Plains style dress that will be corseted (as soon as figure out what it looks like).

I have a tentative appointment with a photographer for new and better pictures of EVERYTHING!!!!

It has been FOREVER since I have written in this blog. Part of it has to do with some dramatic and deeply personal Real LIfe issues. Since 2009 I have lost 2 family members, gained a teenaged daughter, reconnected with my Rocky Horror family, restated a business and become a permanent fixture at not one but two Pop Culture conventions.

I am currently sewing like mad to get a set of DC flavored costumes done for my family. Last year I only got two costumes finished for myself which was a major step up from 2011 when I didn't even get my Steampunk Ball dress finished.

The first year we did Phoenix Comicon I was a member of the moderator staff and had a ball, met some great people; some famous. Last year we, my daughter and I, joined the brand new costuming department as the Cosplay Coordinators. Our big responsibility was to organize a fashion show. No one knew how badly it deviated from the plan. We had a HUGE multimedia presentation that was put together by a good friend that got lost at the last minute The fashion show was a big hit in spite of all the behind the scenes issues.

I also ran a panel/workshop on corset making. I over reached and thought I could show corset making from measurement to finish in a single hour. Hubris. It was fun, well attended and very informative and it's coming back in an hour and a half format. Two other panels join it, Sewing terms and Duct Tape Dress Form and Mannequin making. There was going to be a fourth panel but I have actually begged a professional to do it for me.

This March we did the second Wild WIld West Con, a SteamPunk convention out of Tucson, run by the same people who are running the Steampunk costuming section. I moderated and my daughter herded cats, erm street performers/buskers. Again, met all sorts of really cool people (Read "The Sail Weaver" by Muffy Morigan) froze my butt off, and was introduced to Steam Powered Giraffe.

Well back to sewing and I will be posting pics as soon as the Joker suit is finished.

Before the first of September, I was helping out the costumer from the local community theater group, HollyWho Designs.  The Black Box Theater is doing THE FOREIGNER, this month and looks to be a smash. 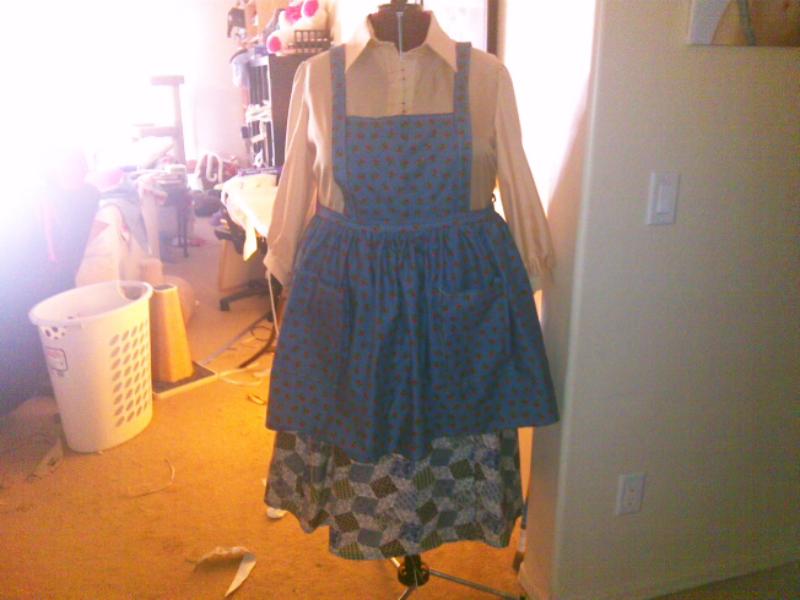 I'm planing on doing a monthy promotion to generate more sales.  So for the month of August we are doing "Friend Pricing".  What is "Frined Pricing"? you might ask...  Well, if you like A Stych in Tyme on Facebook or Follow us on Twitter, and mention it at the time of ordering, you will receive a 50% discount on ALL labor for your clothing.

Cowboys and Aliens and Seamstresses

A local Steampunk group is going to see Cowboys and Aliens this Sunday and we are going.  And so is the green dress!!! well one version of it anyway.  To that end I have officially finished the skirt.  All it took was 2 hook and eyes that I have salvaged off of a gothic hobble skirt I bought years ago, but 2 months later it's done. 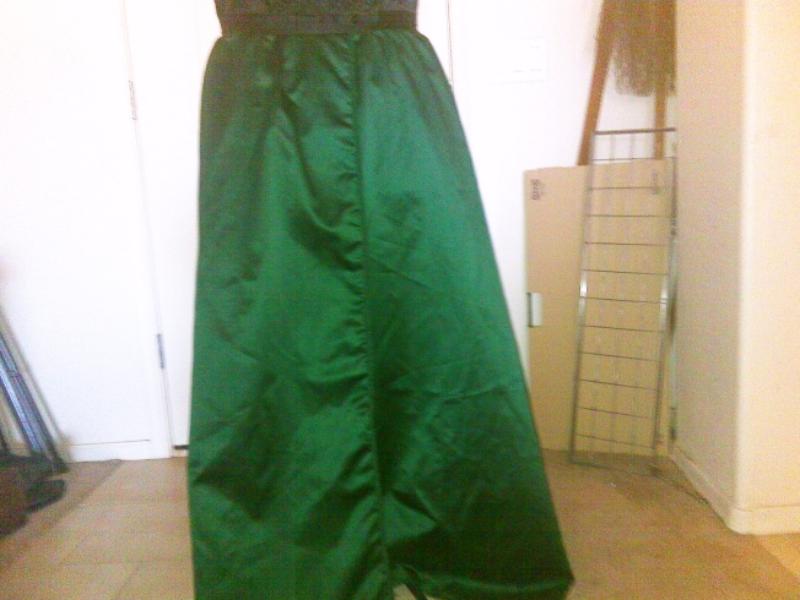 So the skirt, a black beaded satin tank top, an angora pashmina shawl some black lace mits and a great Viki hat all to the movies :). 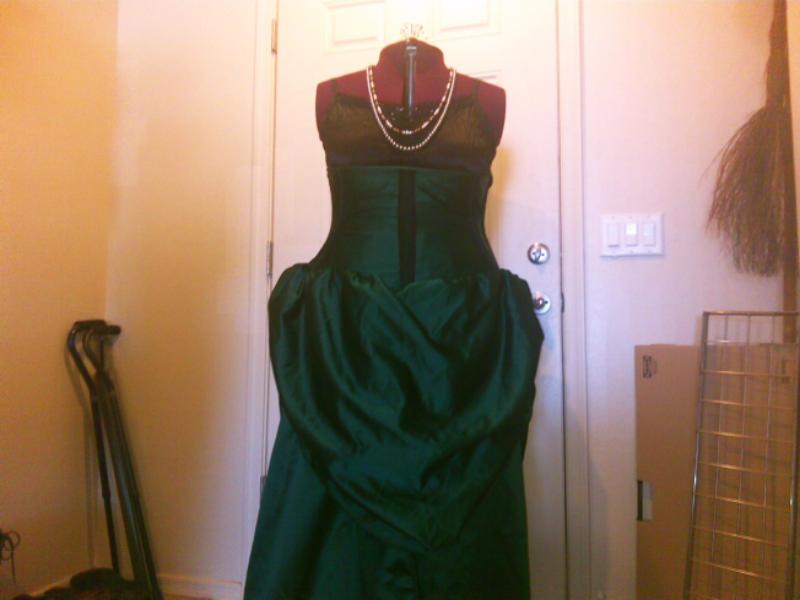 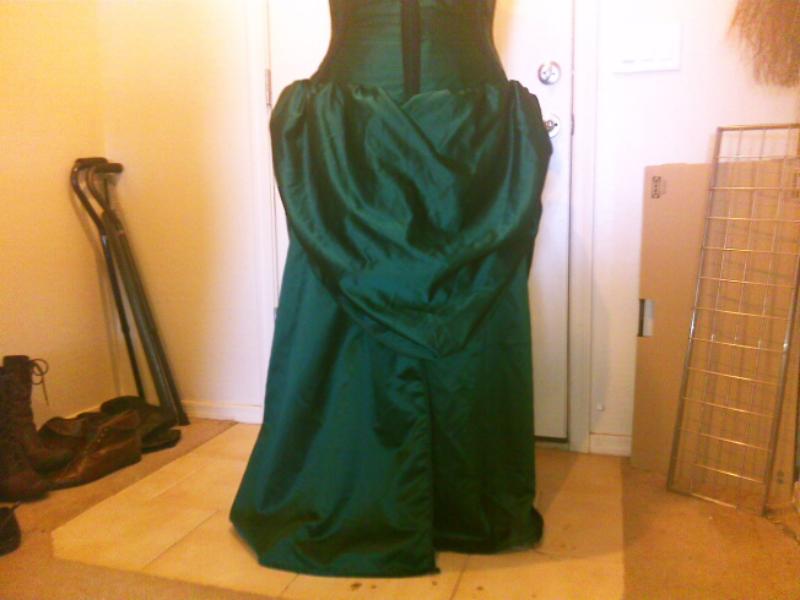 Not all of it has been "real" procrastination, some if it has been personal business.  The dress has 2 sleeves, and the front pannel is half on.  Basically it's at the same place it was before I went to Phoenix Comicon. 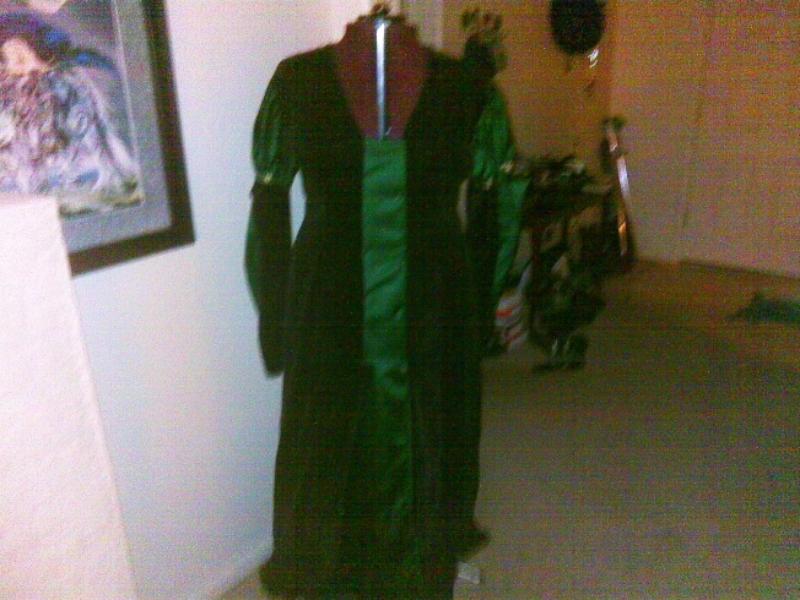 Close up of sleeve, still need to tack the green down 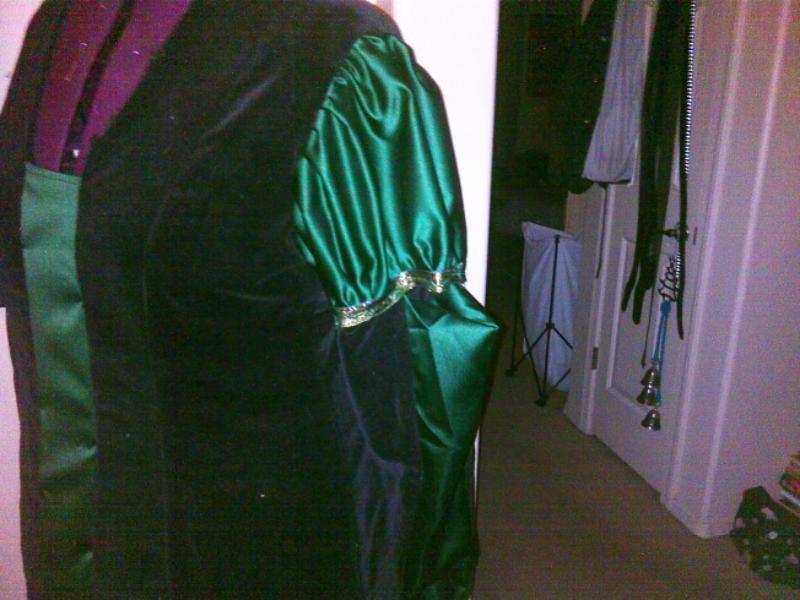 Well home from Phoenix Comicon!! Had a blast, am tired, am sore, got only one autograph, thank you Lisa McMann!!!.

Did not get the dress finished for Comicon . However I did manage to throw together an outfit using bits and baubles from my person Steampunk stash. A white lawn, Armistice day style blouse and a stretch Velvet skirt. 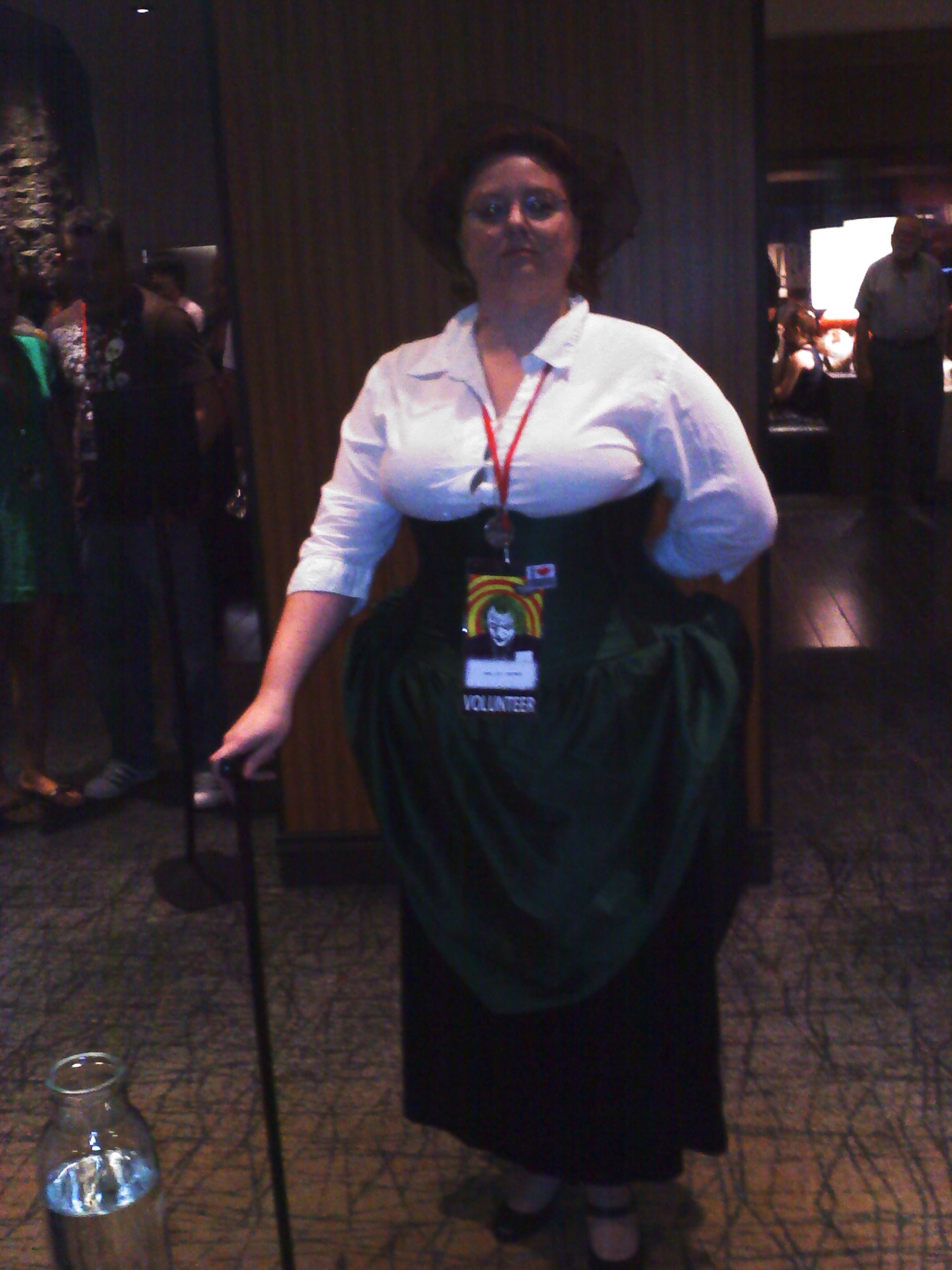 Not the best pix, I know. phone camera and bad lighting at the hotel but....

I plan to have the whole thing done by Saboten Con (October) as a wardrober, several different pieces to make several costumes over the day. The skirt, the polonaise and the corset for day wear and a bodice and bustle for evening or any combo... For Sabo I would call it an Aristocrat Loitia, instead of Steampunk

It less than a week until Phoenix Conicon, my first REAL convention since 1999. Sorry NC Soft and Cryptic, the "first" HeroCon (City of Heroes Meet and Greet) was fun and all but the second HeroCon was a REAL convention. I am desperately trying to get this dress DONE before the con. I have done some new research and discovered that the dress is more in the style of Aristocrat Loli than pure Steampunk, but the brass grommets add the "Steamy" flair.

While re-re-watching the first 3 episodes of Lost, I managed to get the lower half of ONE sleeve done. Yes one sleeve in three hours. I think it's because I'm sick that the machine has been plagued with troubles. The tension is just not right and now I'm out of the green thread that I NEED for the dress. I'm sure a quick run to Wally-World in the AM will fix all my troubles.

Tried on the corset for the first time since loosing my gallbladder, it seems to fit nicely, except.... I bought 9 ft of twill tape to lace it thinking I bought 9 YARDS. My poor apprentice was sitting there with 4 rows of grommets left to lace, scratching her head. We will fix this oversight when we trek to Wal-Mart. Yes I live in a rural enough area that the closest "fabric store" is Wal-Mart, and they have stopped selling fabric and only stock a few "select" quilting supplies. I will be SO happy when Jo-Ann's opens up this summer!!!!!.

In Sickness and In Health....

No, I didn't just get married, that happened five years ago. However I have been grivously ill. Apparently I have been suffering from gallbladder isssues and the ensuing pancratic troubles, for at least six months. I have been being treated for an ulcer, but when the pain came back, I went to the doctor got blood-work done and, plop, right in the the hospital.

I had the surgery to remove my gallbladder on Wednesday, the 20th and was back home by the 24th. After I am "cleared for duty" on Friday the 29th (fingers crossed) I can get back to working on the dress. I would post pictures of my surgeon's knot work if she wasn't so fond of staples.

I have discovered that I need a new anvil for my grommeting set.  I am so glad that I am making this corset for myself and for a Steampunk set, because, in my own opinion, I would not sell this one.  The grommets are WAY too rough. Everythig else is darn near perfect.  Pretty looking grommets would just be the iceing on the cake.  I mean the anvil is about 10 years old and I guess the wear and tear has made the punch's hole too big... or it's just the wrong size.  So, soon, it's off to my favorite sewing supply store,  The Home Depot to get another grommeting starter kit.

Anyway, on to the discription.

The grommets are set along the back in rows 11 inches long, 1 inch appart on the 1/2 inch.  I probably could have gotten 12 grommets in, and will inthe future, however the headache was getting bad and I just wanted it DONE!!!!